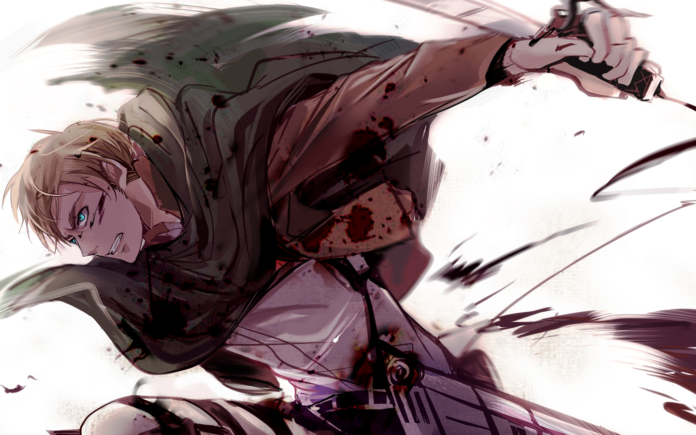 According to the latest data from the MBTI manual, ENTJs are now the rarest personality type in the world. There’s even more. They are now also the rarest female MBTI type in the world. Now, that makes them more intriguing. So, we decided to compile the best ENTJ anime characters we could find.

If we are going to talk about ENTJ anime characters, we have to start with Erwin Smith. He is a textbook version of the ENTJ.

He is analytical and knows exactly what needs to be done to hit his targets. We also see a bit of his charisma on display. He is quite the speaker. People usually seem convinced to follow him after hearing him talk.

He also has great man-management skills. He uses this to determine what soldier can deal with certain information. He is one heck of a leader. Erwin Smith is an ENTJ.

Sukuna is the perfect example of an unhealthy ENTJ. This character is depicted as arrogant and selfish. He’s perhaps even a bit sadistic.

He doesn’t see anything wrong with the slaughter of children and women. He also does what he likes and doesn’t feel he is accountable to anyone.

Just like any ENTJ 8w7, Sukuna has a lust of power. He understands its importance and the respect that comes with it.

Sukuna is as ENTJ as it gets.

Lord Boros is the leader of the dark matter thieves. He is quite powerful. In fact, he doesn’t find anyone who can match his power.

However, this character has certain flaws. His immense power makes him proud. He is also only after his interests. However, one clear thing is his respect for strength and power.

He is also logical and calculating. Lord Boros certainly deserves to be on this list of ENTJ anime characters.

Azula is the fire princess. Since her childhood, she has taken the time to perfect her craft. This is a very confident and pragmatic character.

Just like most ENTJs, her love for power is evident. In fact, she actually believes it defines her and she was meant to rule. She is a princess after all.

She has great composure and doesn’t show a lot of emotions. She is also ruthless in her dealings with others. She is more likely to be an assertive ENTJ. People find her intimidating and prefer not to confront her.

Balakika is the leader of Hotel Moscow. She inspires confidence in her men and leads them to battle every time. Because of her commanding attitude, her men are willing to die for her.

She backs up her confidence with her skills. She is the ultimate strategist and visionary. She is also very pragmatic and realistic.

When the chips are down, Balakika is determined to get what she wants at all costs. She’s clearly an ENTJ.

The work ethic of this character stands out throughout the anime series. He is depicted as talented and great at problem-solving.

While these qualities are clearly not in doubt, Light also has his flaws. This becomes more evident when he gets tainted by the note.

He becomes cold and ruthless. He also becomes more ambitious and ruthless in his quest to meet his goals. We think Yagami is an ENTJ.

Kazuki is a good leader. That perfectly sums up her character. She has the right balance between being a no-nonsense leader and being appreciative of her employees.

She is also very protective of those she loves. When she’s not at work, her hobby is drinking more and more alcohol. Yep, you heard that right.

It was a bit difficult to decide if she was an ENTJ or an ENFJ. However, we finally decided.

Kazuki is an ENTJ.

This character is as straightforward as it gets. Hakaze doesn’t find much joy in mincing words. She says things exactly as she sees them.

She is also quite determined. While she is the main protagonist in this series, she also has her flaws. She can be selfish and stubborn. However, we see the ENTJ’s soft side in her dealings with Yoshina.

We have no doubt. Hakaze is an ENTJ.

Gilgamesh offers us a different look into the ENTJ. He is quite cheerful and enjoys life as it comes. This is probably because of his heightened extroverted sensing (Se) function.

While this is true, it’ll be folly to take his cheerfulness for weakness. Gilgamesh is very ambitious and determined.

Thus, he doesn’t hesitate to destroy any obstacle that stands in his path. That includes humans. He is selfish and cares more about his own interests than anything else.

We have no doubt that Gilgamesh is an ENTJ.

Your first impression of this character will probably be wrong. He looks clumsy and ordinary. However, Mori is anything but ordinary.

He is a strategist and the leader of the Port Mafia. He works well with emergencies and is great with planning.

Just like most ENTJs in anime, he is also very logical. He is very determined and will stop at nothing to get what he wants. This character is cruel and insensitive. However, there is no doubt that he’s a good leader.

Mori Ogai is an ENTJ.

Nona is the manager of the abiter system. She is depicted as very strict and disciplined. We see this in how she treats her employees.

She has strict rules on how things should be run and can be a perfectionist. She is also very calculating and knows exactly what she wants.

Nona is clearly an ENTJ.

This character is depicted as intimidating and cold. While this is true, he commands a large followership.

His followers are often scared of his power and strengths. This is certainly not a farce. Spectra is calculating and is very intelligent. He also craves power. Thus, he is determined to do whatever it takes to get what he wants.

This makes him quite ruthless and insensitive. It is a trait that stays throughout the anime series.

Squealer is the leader of the fly robber colony. For a character so small, he certainly punches above his weight.

He is determined and ready to lose anything in pursuit of his goals. He is also manipulative.

This shows throughout the anime. While warming up to them, his actual plan is to exterminate them. To outsiders, he seems like a cold-hearted leader. To his people, he’s a hero.

Squealer is definitely an ENTJ.

We see Isabella’s progression throughout this anime series. When she was younger, she looked a bit like the ENTP.

However, as she grows older, she began to look more like the ENTJ. Cold and calculating, Isabella is willing to do what it takes to win.

This includes manipulation. Her dramatic change is because of the trauma she faces while working as a caretaker in the orphanage.

Isabella is definitely an ENTJ.

On the surface, it’s easy to see Roy as lazy and a womanizer. However, look deeper and you’ll start to see a lot of his good qualities. First, this character has amazing man-management skills.

He understands the power of delegation and uses this to devastating effects. He is also very analytical. This allows him to stay in front of his opponents at all times.

We also see his need for recognition and glory. He is always quick to take action if it brings him recognition. We believe that he is an enneagram type 3.

Appearances can be deceitful. This is certainly true with this character. On the surface, Kirari seems perfectly normal. However, things are so much different underneath.

Kirari believes she is better than everyone else. She plays life on her terms and can be very manipulative. She also doesn’t hesitate to be ruthless too. We get a glimpse of how unhealthy an ENTJ can get with Kirari.

So, there you have it! Those are the 16 ENTJ anime characters we could find. I hope you had a blast.